The latests in the Oi! series, and its just as good as ever. Frog has decided to write his own alphabet book, and its the funniest alphabet book you’ll ever read!

In his Alphabetty Botty Book (and honestly, what child isn’t going to live that title?!) Frog has decided to give animals that still have nowhere to sit somewhere to park their derrieres, one (or in some cases several!) for each letter of the alphabet.

Frog is as confident and bossy as ever, with Cat remaining their usual resigned and superior self, and there are some classic Dog moments too (not least in the very funny ending!)

Fans of Kes Gray’s ‘You’re Called What?!’ will be pleased to find a plethora of lesser known (or certainly lesser mentioned!) creatures included, with pangolins, quolls and uakaris for starters.

Peapod likes that “pigeons sit on wigeons”, joyfully repeating “pidge-widge! Pidge-widge!” at this point, but his favourites are definitely the jays (after seeing one on a walk once, we must hunt for them on every walk now!) and, of course, the kudu sat on doo-doo, which he (and surely every other toddler who reads this) finds hilarious -” Poo! Sit in poo!” 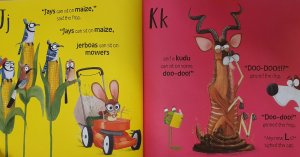 For my part, I giggle at the iguanas sat on piranhas (“they’ll bite their bottoms!” – I don’t know where Peapod gets it from!) and love the big fold out spread from Q to W. If I still taught early years, I would definitely have ended up buying multiple copies of this to turn it into an alphabet strip for my wall!

As bright and bold, as delightfully daft and as completely comical as you’d expect from this series. Just when you think they can’t possibly find anywhere else to go with it, they take it in a new direction and deliver all over again. Fab!

P. S. You can read our reviews of Oi Cat and Oi Duck-Billed Platypus here and here!