I was offered a copy of The Lost Magician for review (thanks to Hachette Kids) and how could I resist with a cover like that?! Courtesy of Ben Mantle, it has a wonderfully magical feel and is a perfect match for the story inside.

An ode to the world of Narnia:

1945. They have survived the Blitz, but when Simon, Patricia, Evelyn and Larry step through a mysterious library door, it is the beginning of their most dangerous adventure yet.

I didn’t know about the connections to Narnia when I got this, but as I started reading I was taken back to the first time I read The Lion, The Witch and The Wardrobe and the countless times I stepped into my grandma’s wardrobe (complete with *fake* fur coat) hoping it would lead me through to a snow-covered Narnia (and imagining it had when it invariably didn’t!).

As in The Lion, The Witch and The Wardrobe, the story centres around four siblings who unwittingly find themselves key to saving the land they’ve stumbled upon.

As with the original four, here too are four very distinct personalities and everyone will have a different favourite. Personally, I loved Larry and Grey Bear. Evelyn will go down well as a female science fanatic, and Simon’s dyslexia (undiagnosed because of the time period) proves an interesting perspective and its nice to see it represented in a book about books.

Cleverly reimagined, this uses the Narnia stories as its base and leaps off into an entirely new world, albeit one with a war raging – mirroring the one the children have left behind and posing some interesting thoughts, ideas and talking points on that theme.

First we meet the Reads (pronounced ‘red’) and Unreads. The Reads are storybook characters, and I’m sure I’m not alone in feeling a little buzz of excitement as some very well-known and well-loved characters were described, introduced and alluded to.

However, trying to destroy the Reads are the Unreads, led by the White Queen inspired Jana (and yes, she is every bit as icy cold and merciless!) The Unreads represent facts, truth, information and data. Brilliantly imagined and described, they turn what could easily have become a nostalgia-fest right into something original and altogether less cosy, with futuristic robots, vehicles and buildings. They provide a great balance to the comforting idea of the Reads.

And ultimately, that is a key theme of the book – balance and compromise; of needing and benefiting from differences – as is the idea that stories are not just entertainment and diversion, but that despite seeming to be the complete opposite of fact, they too teach us things, help us to learn and develop and bring about change and progress.

Books, adventure, battles and magic – it’s an exciting and modern take on ‘The Lion, The Witch and the Wardrobe’ and the perfect homage to libraries, librarians and all things bookish!

Hosted by ‘Taking on a World of Words’, every Wednesday we ask and answer the 3 W’s:

Last time, I snuck an extra W in there too with what Peapod and I had read that week, but I’ve decided to do a regular “Peapod’s Picks” post each Friday instead – picture books/board books new and old!

This week’s WWW, then:

What are you currently reading?

I’ve only just opened this, so no idea about it yet, though it begins with a poem that I thought was beautiful so it’s a promising start…

What have you just finished reading?

I finished The Lost Magician by Piers Torday. I’ve been meaning to read his ‘Wild’ books for quite some time and still not got round to them, but if this is anything to go by the hype surrounding them is justified!

It’s a fantastic, modern take on ‘The Lion, The Witch and the Wardrobe’ and the perfect homage to libraries, librarians and all things bookish! 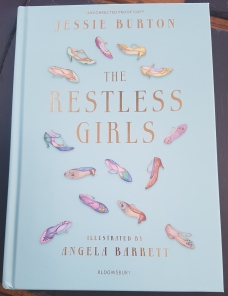 Talking of modern takes on classic books, I’ve also read this beautiful modern version of ‘Twelve Dancing Princesses’ which was one of my favourite fairy tales growing up.

What are you planning on reading next?

These are the most pressing of my TBR pile:

Which would you choose?

Have you read any of the books here? What are you reading at the moment?